Like our work? Arrange a meeting with us at our office, We'll be happy to work with you!

We are always looking for new talents and we were expecting you. Time to apply, buddy! 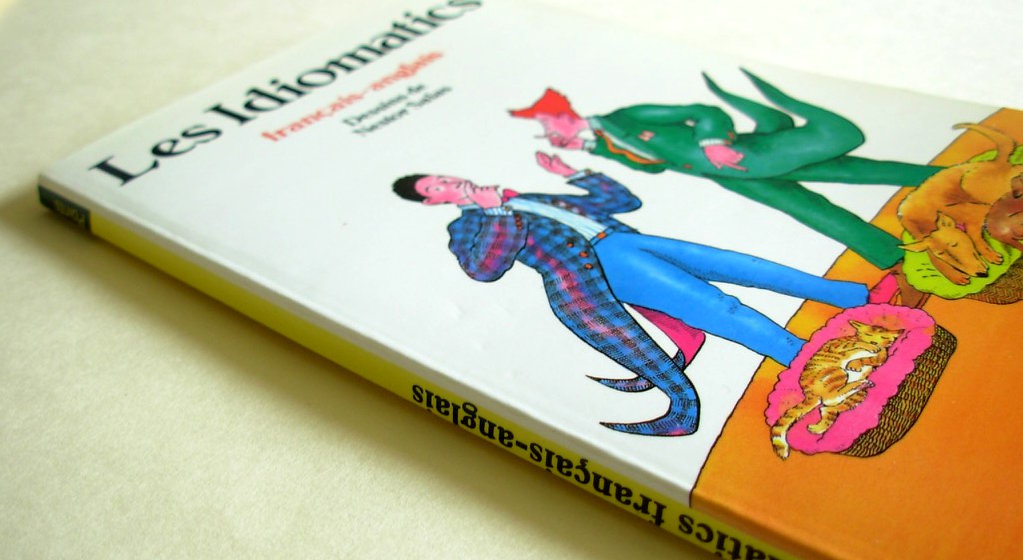 While I now mainly use online language resources for day-to day work, one of the occupational hazards of working with language is ending up with lots of reference books on the bookshelf. Just recently I came across something I’d almost forgotten was there:

It’s a slim volume that presents a list of French idioms with their English equivalent, along with a literal French back translation of this. Both the French original idiom and its English equivalent are graphically represented by a small illustration. The book is one of a series that (presumably) presents foreign-language equivalents of the same set of French idioms. A quick search of the internet reveals that other languages in the series include German, Spanish, Italian, Dutch and Portuguese. The books are apparently based a French television series produced sometime in the late 1980s, and developed by Blum herself.

The Oxford English Dictionary defines an idiom as “a group of words established by usage as having a meaning not deducible from those of the individual words”. Something that is perhaps implicit in this definition is that the group of words in question normally allows for little or no variation, it is a frozen pattern of language. Although some idioms can also have a literal meaning (e.g. the English idiom “to take someone for a ride”), the fact that all have a meaning that can’t be deduced from their individual components only makes things more confusing when you start comparing idioms between languages. To take just a couple of the examples presented in Les Idiomatics, why does something “cost an arm and a leg” in English, but coûte les yeux de la tête (cost the eyes in your head) in French? Why should we “let sleeping dogs lie” but ne pas réveiller le chat qui dort (not wake the sleeping cat)?

The truth is, we don’t really know why. As Mona Baker says in In Other Words1,

However, perhaps a clue lies in the etymology of the word idiom. It comes from the ancient Greek, idiōma, which actually meant “private property”. The fact that idioms are the “private property” of a given language makes them notoriously difficult to translate, and there is plenty of research to say that someone’s ability to use idioms in a foreign language almost never matches that of a native speaker. Coincidently, this is one of the reasons that both the American Translator’s Association and the UK Institute of Translation & Interpreting consider it a best practice to only translate into your mother tongue.

And hence, perhaps, the need for books like Les Idiomatics, which seems like a great introduction to a subject that someone like me finds fascinating. While there are now longer comparative lists of idioms available online, I haven’t seen any that look as charming as this book. It’s made all the more memorable thanks to Nestor Salas’s colourful illustrations that frequently reveal the almost surreal nature of the phrases in question.

Because idioms themselves aren’t copyright material, I’ve reproduced the full list included in Les Idiomatics : français – anglais, with a few minor changes, along with a literal French translation of the English idiom in a downloadable document. For completeness, I’ve also added a literal English translation of the French idiom. Hopefully this will help you to use either language a little more like a native speaker.

Does anyone remember the TV series these books were based on? Does anyone have one of the other books in the series? It would be great to hear from you.

1 Mona Baker, In Other Words: A Coursebook on Translation, (2nd edn., Abingdon and New York: Routledge, 2011)

You can find out more about which cookies are used or change your preferences in settings.

My website uses cookies to provide you with the best possible user experience. Cookies are stored in your browser and perform functions such as recognising your device when you return to my website. This helps me understand which sections of the website you find most useful.

Strictly necessary cookies should be enabled at all times so that you can save your cookie preferences. If they weren't enabled, you would need to enable or disable cookies every time you visited my website.

If you disable this cookie, we will not be able to save your preferences. This means that every time you visit this website you will need to enable or disable cookies again.

My website uses Google Analytics to collect anonymous information such as how frequently the same devices visit my website, the most frequently viewed pages, and how the website is found.

Please enable Strictly Necessary Cookies first so that we can save your preferences!